While nanomedicine has seen many successes, some researchers have been disappointed by its underwhelming overall performance in cancer 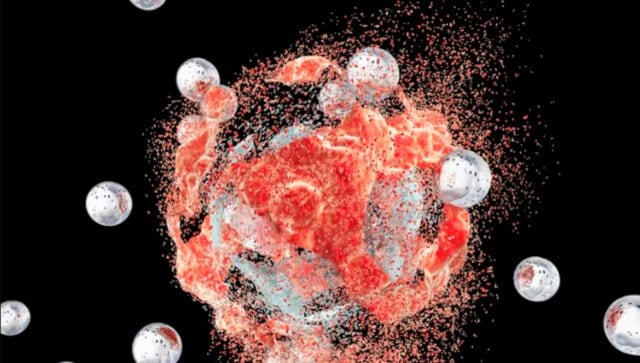 When you hear the word “nanomedicine,” it might call to mind scenarios like those in the 1966 movie Fantastic Voyage. The film portrays a medical team shrunken down to ride a microscopic robotic ship through a man’s body to clear a blood clot in his brain.

Nanomedicine has not reached that level of sophistication yet. Although scientists can generate nanomaterials smaller than several nanometers – the “nano” indicating one-billionth of a meter – today’s nanotechnology has not been able to generate functional electronic robotics tiny enough to inject safely into the bloodstream. But since the concept of nanotechnology was first introduced in the 1970s, it has made its mark in many everyday products, including electronics, fabrics, food, water and air treatment processes, cosmetics and drugs. Given these successes across different fields, many medical researchers were eager to use nanotechnology to diagnose and treat disease.

While nanomedicine has seen many successes, some researchers have been disappointed by its underwhelming overall performance in cancer. To better translate success in the lab to treatments in the clinic, a new way was proposed to design cancer drugs using nanomaterials. Using this strategy, a treatment was developed that was able to achieve full remission in mice with metastatic breast cancer.

While nanomedicine isn’t Fantastic Voyage, it shares the film’s treatment goal of delivering a drug exactly where it needs to go.

Nanomedicine refers to the use of materials at the nanoscale to diagnose and treat disease. Some researchers define nanomedicine as encompassing any medical products using nanomaterials smaller than 1,000 nanometers. Others more narrowly use the term to refer to injectable drugs using nanoparticles smaller than 200 nanometers. Anything larger may not be safe to inject into the bloodstream.

Several nanomaterials have been successfully used in vaccines. The most well-known examples today are the Pfizer-BioNTech and Moderna COVID-19 mRNA vaccines. These vaccines used a nanoparticle made of of lipids, or fatty acids, that helps carry the mRNA to where it needs to go in the body to trigger an immune response.

Gold is one type of nanoparticle whose uses researchers are testing in a range of contexts.

Several nanoparticle-based drugs have been approved for cancer treatment. Doxil (doxorubicin) and Abraxane (paclitaxel) are chemotherapy drugs that use nanomaterials as a delivery mechanism to improve treatment efficacy and reduce side effects.

The potential of nanomedicine to improve a drug’s effectiveness and reduce its toxicity is attractive for cancer researchers working with anti-cancer drugs that often have strong side effects. Indeed, 65 per cent of clinical trials using nanoparticles are focused on cancer.

The idea is that nanoparticle cancer drugs could act like biological missiles that destroy tumors while minimizing damage to healthy organs. Because tumors have leaky blood vessels, researchers believe this would allow nanoparticles to accumulate in tumors. Conversely, because nanoparticles can circulate in the bloodstream longer than traditional cancer treatments, they could accumulate less in healthy organs and reduce toxicity.

Although these design strategies have been successful in mouse models, most nanoparticle cancer drugs have not been shown to be more effective than other cancer drugs. Furthermore, while some nanoparticle-based drugs can reduce toxicity to certain organs, they may increase toxicity in others. For example, while the nanoparticle-based Doxil decreases damage to the heart compared with other chemotherapy options, it can increase the risk of developing hand-foot syndrome.

The COVID-19 mRNA vaccines spurred excitement about nanomedicine’s potential applications to other diseases.

The success of some drugs that use nanoparticles, such as the COVID-19 mRNA vaccines, has prompted excitement among researchers and the public about their potential use in treating various other diseases, including talks about a future cancer vaccine. However, a vaccine for an infectious disease is not the same as a vaccine for cancer. Cancer vaccines may require different strategies to overcome treatment resistance. Injecting a nanoparticle-based vaccine into the bloodstream also has different design challenges than injecting into muscle.

While the field of nanomedicine has made good progress in getting drugs or diagnostics out of the lab and into the clinic, it still has a long road ahead. Learning from past successes and failures can help researchers develop breakthroughs that allow nanomedicine to live up to its promise.

This article is republished from The Conversation under a Creative Commons license. Read the original article.