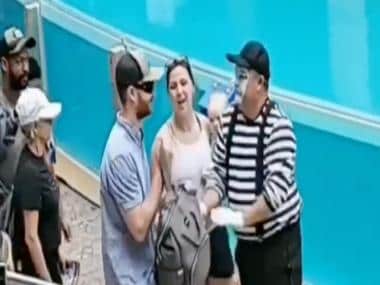 The video has got over 1.4 million views so far. As per local media reports, the video was originally shot by a TikTok user called Ernest at SeaWorld in Orlando, Florida

Today, most of us are working full time. When it comes to taking the responsibility for a family, both partners share the chores. From disciplining and playing with the children to helping out with day-to-day responsibilities.

But sometimes an individual fails to do their part properly. A video of one such incident is grabbing everyone’s attention on social media, where a man is called out for not helping his partner enough.

Have a look at the video here:

In the video, we can see a man dressed as a mime stop a woman at a water park. The lady is carrying her child and a backpack on her shoulder. He then asks her and the man behind her if they are together, to which they reply positively. Showing the man how to be a good partner, the mime picks up the backpack from the woman and then places it on the man’s shoulder.

The mime’s gesture receives cheers from the crowd and he pats the woman on the back as she laughs. The man walks alongside her with a strange expression on his face.

The video has got over 1.4 million views so far. As per local media reports, the video was originally shot by a TikTok user called Ernest at SeaWorld in Orlando, Florida. He had said that the crowd had gathered to watch a seal show when the incident happened.

Reacting to the video, a social media user wrote that only the man was left to be carried by by the woman along with the kid, the bag, and herself. The user pointed out on how some men really need such strangers to make them realize their responsibilities.

Only the man was left to be carried by her along with the kid, bag and herself.
Some men really needs such strangers to teach them how to be responsible @TansuYegen https://t.co/qvy3FsDf0J

The clip also garnered some other reactions:

Why the bag – the kid should be swapped

Imagine getting owned by a MIME!!!
LMAOOOOO

The mime is also seen walking with the couple for a short distance before he makes his way out of the camera’s view. When the camera turns back to him again, he is seen gesturing a telephone-to-the-ear hand movement and mouthing “call me”.