Arvind Kejriwal has announced a political front, People’s Welfare Alliance, in Kerala with Twenty20. The small party is the CSR wing of the Ernakulam-based Kitex Group, the second-largest producer of children’s apparel in the world 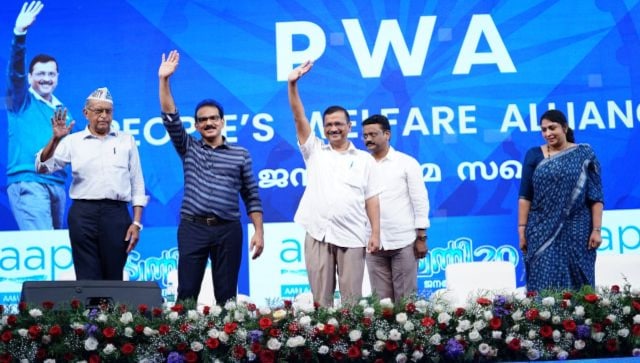 Arvind Kejriwal’s Aam Aadmi Party has found an ally in Kerala – the Twenty20 party. On Sunday, the two announced a new political front in the state, the People’s Welfare Alliance (PWA).

A joint announcement was made by the Delhi chief minister and Twenty20 chief coordinator Sabu M Jacob at a convention held at Kizhakkambalam near Kochi.

“Today is a historic day for Kerala. Through a new political front, People’s Welfare Alliance – Aam Aadmi Party and Twenty20 will work together for the welfare of Kerala and its people,” Kejriwal tweeted.

Today is a historic day for Kerala. Through a new political front – People’s Welfare Alliance – Aam Aadmi Party and Twenty20 will work together for the welfare of Kerala and its people.

Addressing the convention, the AAP chief said, “If you want politics, riots and corruption you can go to them [other political parties]. If you want development, schools and hospitals, you should come to us. Other parties will never provide education to your children because they want to do riots and hooliganism.”

What is the Twenty20?

The Twenty20 is a tiny political party backed by a corporate group, KITEX Group. It’s a major garment company, the second-largest producer of children’s apparel in the world. It was founded by the late MC Jacob in the 1960s, according to an Indian Express report.

Twenty20 is the CSR (corporate social responsibility) wing of the KITEX Group. Kizhakkambalam, where the mass convention was held, is the headquarters of the KITEX group as well as of Twenty20. 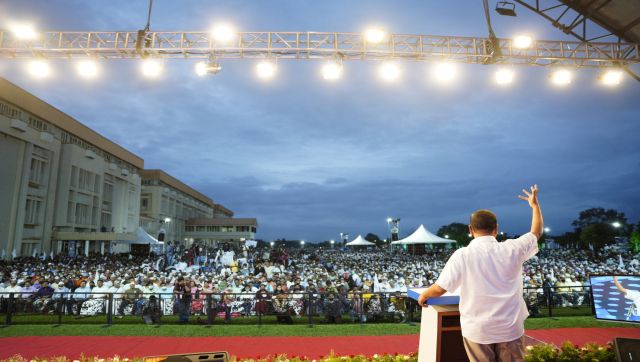 At the mega convention of Sunday at Kizhakkambalam near Kochi, Arvind Kejriwal promised development and free electrictiy. Image Courtesy: @ArvindKejriwal/Twitter

Does Twenty20 have any political experience?

The Ernakulam-based group of companies made a foray into politics in 2015. Last year, it won in four village panchayats in the Ernakulam district.

In 2021, the party made its election debut and fought from a few constituencies in Ernakulam. However, it faced allegations of being the B-team of the Communist Party of India (Marxist). Twenty20 came third in six of the eight constituencies where it contested, pushing the BJP to fourth position, reports The Indian Express.

It won votes because of the goodwill of its CSR activities and a lot like AAP, it was a good option for those looking for a change and options beyond traditional parties in the state, according to the report.

Sabu M Jacob is the coordinator of Twenty20 and the managing director of the Kitex Group.

The PWA would make a situation conducive to the peaceful life of the people, Jacob said at the convention.

Why did Kitex Group have a run-in with the Kerala government?

The Kitex group has hit headlines in the past because of its relationship with the Kerala government. In July last year, Jacob said that his conscience did not allow him to “invest a single rupee” in his home state. The company had pulled out Rs 3,500 crore investment, which it had earmarked in 2020 for setting up a textile park in Kerala and announced plans to invest Rs 1000 crore in Telangana.

The tussle between the corporate and the state government started after a series of inspections by Kerala’s labour and health department at Kitex’s manufacturing unit and premises. The fallout with the government was reportedly linked to Jacob’s entry into politics.

Jacob had alleged that through the inspections, businessmen like him were “harassed”. He also threatened to leave the state if “ease of doing business did not improve”, according to The Quint, adding that the inspections were politically motivated.

At Sunday’s convention, the Twenty20 convenor once again hit out at the ruling CPI (M) government, saying that the K-rail project, a semi-high speed rail project connecting Thiruvananthapuram to Kasaragod, would kill Kerala. “The state has a government, which does not run a transport bus profitably. How can such a government run the Rs 62,000-crore K-Rail project,” he added.

What does the alliance mean for AAP?

With this alliance, Kejriwal is hoping to make an impact in Kerala politics. The party is looking to expand at a national level after a thumping victory in Punjab in the state Assembly elections. AAP has also opened its account in Goa and has its eyes set on Gujarat which holds state polls later this year.

The AAP contested a few seats in the 2014 Lok Sabha elections in Kerala but has yet to make a mark. It hopes to do so with the help of Twenty20. However, the tiny party’s influence is only restricted to panchayats in the Ernakulam district so far.

The PWA has a mammoth task ahead of it.

Kerala has a history of political alliances and the state has alternated between the Left-led LDF and the Congress-led UDF. However, in the last election, the Pinarayi Vijayan government won a second term, breaking away from the tradition. The Bharatiya Janata Party has also made an inroad in the state, winning one seat.

Kejriwal has promised development for Kerala and free electricity. “Inverter, generator shops have been shut in Delhi because of 24×7 power supply, which is free of cost. Do the people of Kerala not want free electricity too,” he asked at the convention.

He spoke of the Delhi model and how it could be applied to the state. “We will have to make an alliance of 130 crore people in the country,” he said.

The by-election to the Thrikkakara constituency is to be held on 31 May. However, PWA will not fight the polls. The AAP-Twenty20 alliance has a set goal in mind – the 2024 general elections.