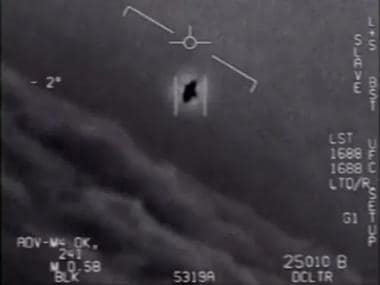 The term UFO refers to any aerial object or optical phenomenon not readily identifiable to the observer. Its usage goes back all the way to the 1950s – UFOs became a subject of fascination for the public and in popular culture when humans first began exploring space

The first public hearing on Unidentified Flying Objects (UFOs) in a half a century saw a top US defence official tell lawmakers that an increasing number of these objects have been reported in the sky over the past 20 years.

“Since the early 2000s we have seen an increasing number of unauthorized and/or unidentified aircraft or objects in military controlled training areas and training ranges and other designated airspace,” Scott Bray, deputy director of Naval intelligence, told a House security panel.

Bray attributed the rise to efforts by the US military to “destigmatize the act of reporting sights and encounters” as well as to technological advances.

However, he said the Pentagon had detected nothing “that would suggest it’s anything non-terrestrial in origin” behind these phenomena.

On the other hand, Brey also did not definitively rule out that possibility.

“We’ve made no assumptions about what this is or isn’t,” Bray said.

These remarks are just the latest example of how far the discussion surrounding UFOs – once openly derided across the media and those in power at the highest levels  – has come.

Let’s examine the origins of the term UFOs, what they are, as well as the biggest and most credible sightings:

The term UFO refers to any aerial object or optical phenomenon not readily identifiable to the observer. Its usage goes back all the way to the 1950s – UFOs became a subject of fascination for the public and in popular culture when humans first began exploring space.

Also, it is important to note that government officials now prefer the term Unidentified Aerial Phenomena (UAP) rather than UFO (presumably due to its connotations with little green men).

It was then that the term flying saucer was coined.

Perhaps the most infamous UFO encounter in history is of Betty and Barney Hill in 1961.

The tale goes thus: They were driving at night in New Hampshire when they began being followed by a bright light. The next thing they knew they were home the next day, with their clothes ripped and dirty and watches stopped working. During sessions with a psychiatrist they both remembered being abducted and probed by aliens. This is the first widely-publicised report of an alien abduction.

In 1994, it was reported that a large, saucer-shaped spacecraft and several smaller craft had landed or hovered near a schoolyard in Zimbabwe.

In 2006, around a dozen United Airline employees spotted a metallic craft – hovering over Chicago’s O’Hare International Airport in broad daylight – for minutes altogether before disappearing. The employees even alerted the airport tower, only to be told nothing turned up on the radar. The FAA, meanwhile, said it was a “weather phenomenon” and decline to investigate further.

The renewed interest in UFOs over the past few years can be chalked up to specific videos taken by the US Navy being leaked.

Written up in The New York Times, the first and perhaps most important of these, known as the USS Nimitz incident, was named after the carrier from where the pilot of the jet, Cmdr. David Fravor and wing pilot Lt. Cmdr. Amy Dietrich took off.

The video, taken in 2004, appeared to show a “white tic-tac” looking object around the size of an FA/18 without wings, markings or exhaust plumes.

This video, taken in 2015, shows US Navy F/A-18 Super Hornet observing an unidentified aircraft at low altitude. The pilots, barely able to contain themselves, observe a tiny, white object scooting over the water.

So, what’s the truth?

The truth is that no one really knows the truth.

In June 2021, US intelligence had already claimed in a long-awaited report that there was no evidence of the existence of extra-terrestrials in the skies, while acknowledging that they had no explanation for dozens of phenomena observed by military pilots.

Some could be explained by the presence of drones or birds creating confusion in the radar systems of the US military.  Others could stem from tests of military equipment or technologies carried out by other powers, such as China or Russia.

The US military and intelligence are primarily interested in determining whether these aerial objects may be linked to threats against the United States.

“Unidentified Aerial Phenomena are a potential national security threat. And they need to be treated that way,” said Democratic Representative Andre Carson of Indiana, who was chairing the panel holding the hearing.