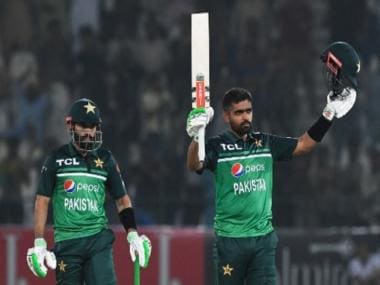 Toggle between the tabs above to switch between quick scorecard, full scorecard and ball-by-ball commentary

Toss report: Pakistan’s captain won the toss and chose to bat in the third and final day-night international against the West Indies in Multan on Sunday.

Pakistan, who have an unbeatable 2-0 lead in the series, handed an ODI debut to 23-year-old fast bowler Shahnawaz Dahani, who came into the side in place of Haris Rauf.

West Indies made three changes, as they left out Alzarri Joseph, Anderson Phillip and Brandon King to bring in Keacy Carty, Jayden Seales and Keemo Paul.

Pakistan won the first match by five wickets and the second by 120 runs — both in Multan.

With inputs from AFP