Pune-based Gennova Biopharmaceuticals COVID-19 vaccine, which is awaiting a nod from India’s drug regulators, can be stored at temperatures between 2 and 8 degree Celsius, making its availability in remote areas possible too 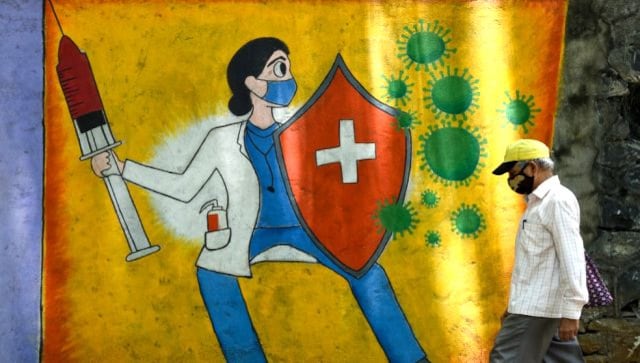 A resident walks past a wall mural depicting a health worker wearing a face mask while holding a vaccine and a shield to spread awareness about coronavirus. AFP

India’s fight against COVID-19 is about to get a huge push as the country’s first mRNA-based vaccine is one step closer to getting approval.

The vaccine developed by Pune-based Gennova Biopharmaceuticals has completed its Phase III trials and the data has been sent to the Central Drugs Standard Control Organisation (CDSCO) for review and approval.

Dr NK Arora, who heads the COVID-19 working group of the National Technical Advisory Group of Immunisation, was quoted as telling Indian Express that the vaccine would be available soon and that it would be a ‘gamechanger’ in the fight against the pandemic.

Let’s take a closer look at this vaccine and why it is being touted as an important step in the battle against COVID-19.

What is an mRNA vaccine and how does it work?

An mRNA (Messenger Ribonucleic Acid) vaccine is modified RNA from an organism that’s introduced to a patient to induce immunity against that specific virus. It uses protein from the virus to allow the human body to learn how to fight the virus.

mRNA vaccines work by conditioning the immune system to fight the virus before even being infected. Once introduced into the human body, mRNA vaccines activate a kind of specific response and a specific set of cells that help the body create stronger antibodies.

This is not the case in an mRNA vaccine. In the case of such vaccines, experts insert the genetic code of the pathogen into the body to prompt the human cells themselves to produce the target proteins for the immune system to identify and attack.

Also read: What is Anocovax, India’s first COVID-19 vaccine for animals? Have pets, wildlife received jabs in other countries?

What we know of Gennova’s vaccine?

According to reported information, Gennova, a subsidiary of Emcure Pharmaceuticals, is India’s only company to develop an mRNA vaccine against coronavirus.

The vaccine, initially known as HGC019, has been developed in collaboration with the United States-based HDT Biotech Corporation and work on it began in 2020.

The pharma company had in April submitted data on the vaccine to the CDSCO following which additional data had been asked for, which has now been provided. The pharma giant said that the data collated was based off the 4,000 people who participated in the phase III trials — which evaluated the vaccine’s safety, immunogenicity and tolerability.

As per data from the phase I trial, the Gennova vaccine was found to be “safe, tolerable and immunogenic” by the CDSCO.

Moreover, the company said it is also working on a version of the jab against the Omicron variant.

However, one distinguishing factor that makes the development of Gennova’s vaccine more significant is that unlike Moderna and Pfizer, the Gennova vaccine can be stored at temperatures between 2 and 8 degree Celsius, which means it can be stored at the temperature of a standard medical refrigerator.

Unlike the other vaccines that need to be stored at sub-zero temperatures, this vaccine could be stored in a standard medical refrigerator allowing for its availability in remote areas too.

“I have yet to see the complete data. However, this is cutting edge technology that will ensure availability of the product in remote areas. So this vaccine is a gamechanger and brings about equity,” Dr NK Arora told the Indian Express.

Another advantage of the mRNA vaccines is that not much development is needed in terms of infrastructure. Robert Langer, the David H Koch Institute Professor at MIT, a member of the Koch Institute, and one of the founders of Moderna, explains, “The beauty of mRNA is that you don’t need that. If you inject nanoencapsulated mRNA into a person, it goes into the cells, and then the body is your factory. The body takes care of everything else from there.”

This also helps in making these kind of vaccines more cost-effective; one can come up with the same million kinds of numbers of doses in a much smaller setup.

Niti Aayog member VK Paul was quoted as saying that the mRNA vaccine would be “important in the medium term, near future and beyond”.

“There are so many diseases for which we are still hunting for an affordable and effective, lasting vaccine. We treasure this platform, and we compliment the company that has gone into this,” Paul had said. “The vaccine is stable at normal temperature. It is a remarkable possibility and technology on the horizon.”