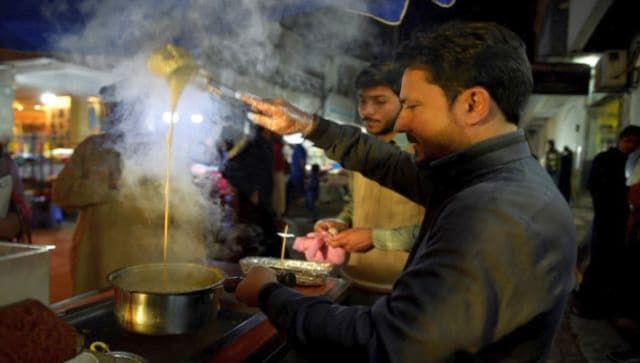 Pakistan is the world’s largest importer of tea. AFP

‘Ek garam chai ki pyaali ho’ sang Salman Khan many years ago. However, as of today Pakistan is asking its countrymen to reduce the amount of tea they drink to keep the country’s economy afloat.

Federal Minister for Planning Ahsan Iqbal made the appeal on Tuesday, “I appeal to the nation to cut down the consumption of tea by one-two cups because we import tea on loan.” He added that Pakistan, one of the biggest importers of tea in the world, has to borrow money to import it.

Tea consumption has been on a high in the South Asian nation of 220 million. In 2020, it bought more than $640 million worth of tea, according to the Observatory of Economic Complexity.

The appeal to reduce tea intake was met with ridicule and heavily criticised by Pakistan citizens on Twitter.

“Did Ahsan Iqbal really ask the nation to cut down on chai? Did he honestly really ask us for that? Do they really think we’re that stupid, a Twitter user said.

“Ahsan Iqbal urging the nation to cut down on chai. I’m sorry but I can not be a part of this, another user named Zoha said in a tweet.

The imports of tea worth millions is putting pressure on the already-cash strapped economy of Pakistan.

The country’s foreign currency reserves continue to fall rapidly — putting pressure on the government to cut high import costs and keep funds in the country.

Many believe that the situation in Islamabad could be in a similar position as that of Sri Lanka if tough decisions are not taken.

Recent reports stated that Pakistan has $6.4 billion in debt due over the next three years. Moreover, data of 13 countries compiled by Bloomberg showed that Pakistan is the worst performer in Asia, with its rupee dropping by almost eight per cent in the last month. The country is desperately negotiating a bailout package with the International Monetary Fund and other countries to keep its economy afloat and avert a default.

The situation has been so dire that the trader community has been asked to close markets by 8.30 pm, in an attempt to conserve energy. Ahsan Iqbal said this will help the country cut the import bill of petroleum products.

Additionally, the government announced a ban on wedding functions in Islamabad city after 10 pm from 8 June. Officials said this would help in reducing the consumption of electricity.

In light of such a situation, Prime Minister Shehbaz Sharif went to Saudi Arabia and other friendly countries to acquire financing from them.