Naftali Bennett has called time on his government just a year into the job after members in his eight-party coalition kept leaving, paving the way for his ally and Foreign Minister Yair Lapid to take charge as caretaker prime minister in Israel 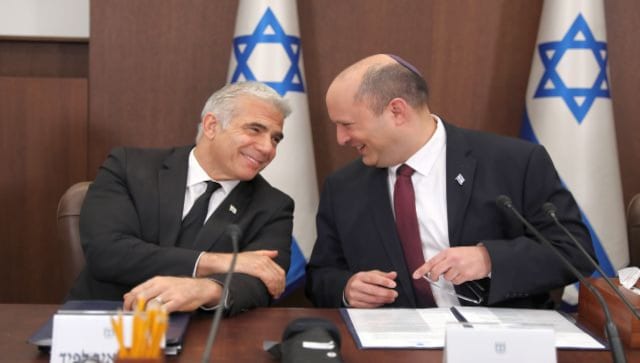 Just a year into his job, Naftali Bennett is out and the country of Israel is once again going to the polls — the fifth election in three years.

Along with his key coalition ally Foreign Minister Yair Lapid, Bennett has agreed to submit a bill to dissolve parliament, which if passed would trigger a general election later this year.

A short statement from the prime minister’s office said the move came “after attempts to stabilise the coalition had been exhausted.” A bill would be submitted to parliament at some point next week, the statement added.

We examine the factors that caused the downfall of the Bennett government and what happens next now.

Fall of the Bennett government

The Bennett-Lapid government was sworn into office in June last year bringing an end to the premiership of Benjamin Netanyahu, which had lasted some 12-and-a-half years.

Made up of no fewer than eight political parties, the coalition stretched right across the political spectrum, including for the first time an Arab party, led by Mansour Abbas.

United in a desire to prevent Netanyahu from remaining in power, the unlikely coalition partners agreed to put their substantial differences to one side.

However, differences crept into the functioning of the coalition with a number of members either quitting, or threatening to quit in recent weeks, leaving the government without a majority in parliament to pass legislation.

In April, a lawmaker from Naftali Bennett’s hardline Yamina party left the coalition, causing it to lose its razor-thin majority of 61 out of the 120 parliamentary seats in the Knesset.

The matter came to a head earlier in June when a Knesset (legislature) vote failed to uphold the application of Israeli criminal and civil law to Israelis in the occupied West Bank.

The coalition government can be proud that they were able to pass overdue budgets, and guide Israel through the latter stages of the COVID-19 pandemic without ordering new lockdowns.

It has also largely dampened the tensions that last May led to a round of fighting between Israel and Hamas, the Palestinian militant group in control of the Gaza Strip, as well as ethnically charged violence on the streets of Israeli cities. 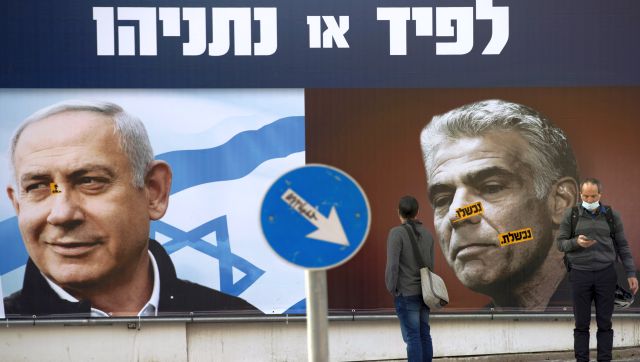 People stand in front of an election campaign billboard for the Likud party showing a portrait of its leader Benjamin Netanyahu, left, and Yair Lapid, in Ramat Gan, Israel. AP

While announcing his decision of stepping down, Bennett said that dismantling the government “isn’t an easy moment”. “Over the past weeks, we did whatever we could to save this government, not for us, but for the benefit of the country,” he said.

As per an existing agreement, Lapid, a former journalist who heads the largest party in the coalition, will serve as interim prime minister until new elections can be held.

Lapid, the incoming premier, praised Bennett as a friend and for the “responsibility he is showing today, for the fact that he is putting the country before his personal interests”.

For those who are unaware, Israel votes by party, and in the country’s 74-year history no single faction has won a majority in the 120-member parliament, known as the Knesset. So after every election, any would-be prime minister must form alliances in order to cobble together a majority of at least 61 seats.

Elections are expected in late October or November, after the conclusion of several major Jewish holidays and this is where Netanyahu comes in.

Netanyahu has called the developments “great news for millions of Israeli citizens”, and vowed to return to office as prime minister.

Opinion polls have suggested that Netanyahu’s Likud party will very likely be the largest in the next Knesset. However, what remains uncertain is if will be able to put together a ruling coalition. As a report in The New York Times pointed out, some parties will likely want to ally with Likud only if Netanyahu resigns as party leader.

For critics, Netanyahu is politically corrupt and a threat to democracy. He is facing a trial for corruption, which he has rejected as a “witch hunt”.