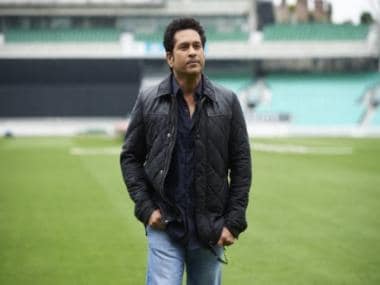 Indian legend Sachin Tendulkar may have retired from international cricket but the star batter continues to make heads turn due to his social media posts. On actor Ranveer Singh’s birthday today, 6 July, the batting legend shared an adorable throwback photo of them. The image, and Tendulkar’s caption, is sure to leave you smiling.

“Happy Birthday, Ranveer! Have a great year ahead. Found this picture of ours… Any guesses when this was clicked?” wrote Tendulkar.

The post shows a young Ranveer Singh, and his father Jagjit Singh Bhavnani, posing with Tendulkar for a picture. While the actor is dressed in a white shirt, the star batter looks dapper in a blue T-shirt and black jacket. Bhavnani is dressed in formals.   The post grabbed eyeballs on social media, with actor Riteish Deshmukh posting a cheeky reply. “When you both were in school together?? (you look a year younger )”, wrote the Housefull actor.

Many fans guessed that the picture must have been taken around 2002-2003, based on Tendulkar’s hairstyle. Others joked about Singh wearing normal clothes in a photo for a change.

This is not the only one of Tendulkar’s posts to have caught the attention of social media users. Earlier, the right-handed batter had asked his fans to choose his activities for a whole day. The India great had uploaded a video wherein he chose his outfit, drink and even what game to play based on the votes cast by his followers. Check it out:

The most prolific run-getter in the history of cricket, Tendulkar holds several records to his name.  He remains the only person to have gone past the 15,000-run mark in both Test and ODI cricket. In 200 Tests, Tendulkar scored 15,921 runs at an average of 53.78. In ODIs, he smashed 18,426 runs in 463 games. The legend hung his boots after his final Test match in 2013.