Backed the Rajapaksas’ party, Wickremesinghe became the president. Now at the helm of affairs, he faces multiple challenges including how to keep the Rajapaksas at bay 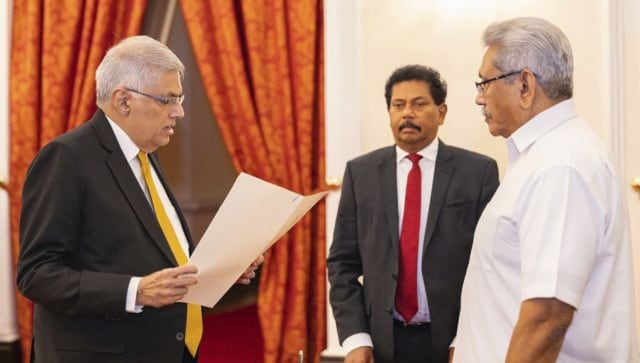 It was a dream of a lifetime come true when Ranil Wickremesinghe took oath as Sri Lanka’s president on 21 July 2022. It was also something that would have been almost impossible under normal circumstances.

Six-time PM Wickremesinghe is the sole MP from his United National Party in the 225-member strong parliament.

Backed the Rajapaksas’ party, he was elected as the leader of the crisis-hit country in a poll in which only MPs voted. The Rajapaksa-led Sri Lanka Podujana Peramuna has 100 seats in the parliament where the majority mark is 113.

Wickremesinghe also managed to get the support of some of the Opposition lawmakers.

Interestingly, a day ahead of his election, Wickremesinghe tried to distance himself from the now disgraced Rajapaksa clan.

The 73-year-old told CNN that he was “not part of the Rajapaksa administration,” despite being appointed as the PM by former president Gotabaya Rajapaksa on 14 May.

Now at the helm of affairs, Wickremesinghe faces multiple challenges including how to keep the Rajapaksas at bay.

His appointment as the PM and later his election as the president were met with disapproval with critics saying that having a “weak” leader in charge, the Rajapaksas have been trying to maintain their grip on power.

Wickremesinghe’s proximity to the Rajapaksas even when he did not depend on them to remain in power has led critics to dub him “Ranil Rajapaksa”.

During his tenure fourth stint as the PM from 2015 and 2018, Wickremesinghe was accused of shielding the out-of-power Rajapaksas in corruption cases.

The question is why does Wickremesinghe support Rajapaksas?

In his own words, “politics is more than chess. It is teamwork like cricket.”

No one can understand the role of “teamwork” in politics better than Wickremesinghe who has mostly been in power in a coalition government.

But his position as an alliance partner has never been as frail as it is in the current coalition.

Wickremesinghe entirely depends on Rajapaksa’s SLPP which is the largest party in the Sri Lankan parliament.

But he has not always taken a pro-Rajapaksa stand, at least not when it threatened his own position. In 2018, Wickremesinghe refused to step down as the PM when then president Maithripala Sirisena dismissed him and appointed Mahinda Rajapaksa as the prime minister.

In the end, Sirisena backed down and Wickremesinghe was reappointed as the PM.

The Rajapaksas’ power has dwindled but they still remain relevant in Sri Lankan politics. Mahinda voted in the recent presidential poll and according to Cabinet spokesman Bandula Gunawardena, Gotabaya will return to the country.

But can the two brothers oust Wickremesinghe?

The last time they tried to do so Wickremesinghe put up a strong fight but the numbers were also in his favour. During the 2018 constitutional crisis, the Wickremesinghe-led ruling alliance had 106 seats- 7 short of a majority.

But Sirisena’s decision to dismiss him was opposed by the majority of lawmakers. The Opposition refused to acknowledge Mahinda’s appointment as the PM.

In the end, Wickremesinghe was reinstated as the prime minister.

Currently, he depends majorly on the support of the Rajapaksas’ SLPP but numbers showed that he managed to get support from other parties too.

In the 20 July polls, Wickremesinghe got 134 votes while his main opponent Dullas Alahapperuma received 82 votes. The SLPP has 100 seats.

The public sentiment against the Rajapaksas is at an all-time low. Any attempt to oust a government will be met with a massive backlash.

Opposition lawmakers too will likely oppose such a move which could worsen the crisis in Sri Lanka.

The 2018 crisis lasted for seven weeks but had a drastic impact on Sri Lanka’s economy. It lost a billion dollars in foreign reserves.

For the economic condition in Sri Lanka to improve and for the country to receive any international aid, the country needs to have political stability. It will be too risky for the embattled Rajapaksas to destabilise the government.

The Rajapaksas may also be hoping to evade conviction over corruption charges with Wickremesinghe in power. As of now, it’s a two-way relationship but things may change if Wickremesinghe tries to step out of the shadow of the Rajapaksa clan.