Here’s everything you need to know about Gururaja Poojari, India’s weightlifting bronze medallist at the 2022 Birmingham Commonwealth Games 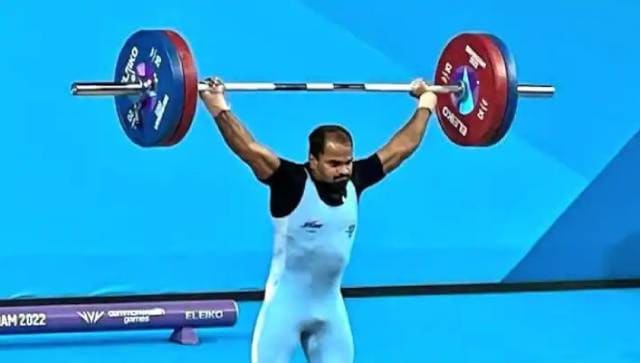 India’s Gururaja Poojary in action during the Commonwealth Games in Birmingham on Saturday. Screengrab/Sony Liv

This was also India’s second medal at the ongoing CWG as Sanket Mahadev Sagar claimed the silver in 55kg category while losing out the battle of gold to Malaysia’s Aniq Kasdan as the Indian hurt his arm during his final lift.

For Gururaja, this was a downgrade to his 2018 Gold Coast silver medal, which came in 56kg category. Gururaja shifted to 62kg category post-pandemic. The 29-year-old Indian, however, had to fight tooth and nail with Canada’s Youri Simard, who lifted a kg less than Gururaja.

The enthralling battle happened during the clean and jerk round when Gururaja lifted a 151kg in his fourth attempt to pip Simard, who earlier lifted 149kgs in response to the Indian’s 148kg lift to put the pressure right back on his rival.

Born in Karnataka’s Vandse village to pick-up truck driver Mahabala Poojari, Gururaja is no new name in the international weightlifting fraternity with major success at the Gold Coast Commomwealth Games with a silver medal in the 56kg category.

His first international medal, however, came in 2016 at the South Asian Games in Guwahati, where he won a gold in the 56kg category. This was followed by another gold at the Commonwealth Championship in Malaysia later that year.

Switching weight category to 62kg,  the 29-year-old lifter also won the Commonwealth Championship silver medal in Tashkent last year to prove his credentials ahead of the Games.

At the national level, he won All India University title in Jalandhar and a silver medal at the Weightlifting Nationals in 2015, an improvement from his bronze at the last edition. His first senior Nationals title had to wait until 2016 when he won the gold medal in Tamil Nadu.

A diminutive figure at 156 cm, Gururaja was born in a poor family of eight members and had five brothers. Inspired by Sushil Kumar’s bronze medal at the 2008 Olympics, Gururaja tried his luck in wrestling early on while studying at Mookambika High School in the Udipi district.

His physical education teacher Sukesh Shetty saw the athlete in Gururaja and pursued him to build his career through wrestling, which eventually earned him a quota in SDM College in Ujire, South Karnataka.

However, watching Vikas Thakur win silver at the 2014 Glasgow CWG attracted Gururaja’s interest in weightlifting. Studying at SDM also turned pivotal in the casue as his college coach Rajendra Prasad trained him the skills of weightlifting.

However, career in weightlifting and a stable job was still an issue for Gururaja, who wanted to work for Indian Army but had to settle with the Indian Air Force, where he serves as Aircraftman.