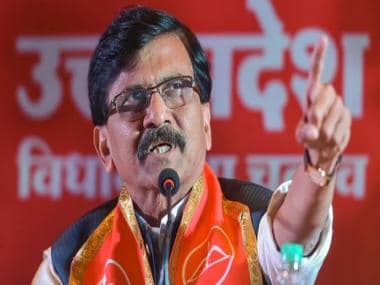 On Sunday, the ED conducted searches at Shiv Sena MP Sanjay Raut’s house in Mumbai after he did not show up for questioning in the Patra Chawl case. The probe is linked to a Rs 1,034-crore alleged land scam related to the re-development of the chawl in Mumbai’s Goregaon

The move came after Raut skipped summons twice for questioning. The Shiv Sena leader was summoned by the ED on 17 July after he skipped an earlier summon citing the ongoing Parliament session in Delhi.

At 7 am, Sunday, the officials of the probe agency and the Central Industrial Security Force raided Raut’s home in Mumbai’s eastern suburb of Bhandup.

The ED wants to question the 60-year-old leader in connection to the redevelopment of the chawl in Mumbai and related transactions that also involve his wife Varsha and his close aides.

The Rajya Sabha MP, who is in the Uddhav Thackeray faction, had denied any wrongdoing and alleged that he was being targeted due to political vendetta.

Following the searches, Raut tweeted, “I have nothing to do with any scam. I am saying this by taking the oath of Shiv Sena chief Balasaheb Thackeray. Balasaheb taught us to fight and I will continue to fight for Shiv Sena.”

What is the alleged scam all about? What are the allegations against Raut and his wife, Varsha? We take a look.

According to the ED, however, Sanjay Raut’s close aide Pravin Raut and the other directors of Guru Ashish constructions didn’t construct a single house for the 672 displaced tenants. They allegedly sold the floor space index to nine private developers, collecting Rs 901.79 crore.

What are the allegations against Sanjay Raut and his wife?

The ED has claimed that their investigations showed that Pravin Raut received Rs 100 crore from Housing Development and Infrastructure Ltd (HDIL) of which Guru Ashish Construction Pvt Ltd is a subsidiary and “diverted” it to various accounts of “his close associates, family member, his business entities” including the family of Sanjay Raut.

According to the ED, during 2010, part of the proceeds, amounting to Rs 83 lakh, were received by Varsha Raut directly/indirectly from Madhuri Raut, the wife of Pravin Raut. This amount was utilised by Varsha Raut for the purchase of a flat in Dadar. It is also revealed that after the initiation of the ED investigation the amount of Rs 55 lakh was transferred by Varsha Raut to Madhuri Raut. There are also various other transactions.

“During the said period, eight plots of land at Kihim beach in Alibaug were also purchased in the names of Varsha Raut and Swapna Patkar, wife of Sujit Patkar, a close associate of Sanjay Raut. In this land deal, apart from the registered value, cash payments were made to the sellers. On identification of these assets and other assets of Pravin Raut, a provisional attachment order attaching all these assets of Pravin Raut and his associates has been issued,” the ED said.

How far has the probe progressed?

Sanjay Raut has been questioned once in this case on 1 July and spent about 10 hours with the investigating officer during which his statement was recorded under the criminal sections of the Prevention of Money Laundering Act (PMLA).

In April, the ED provisionally attached assets worth over Rs 11.15 crore of Varsha Raut and two of his associates as part of this investigation. Eight land parcels in Alibaug and a flat in Mumbai’s Dadar suburb linked to him and his family were attached.

In a statement to the press back in April, the fiery Shiv Sena leader said, “I’m not one to get scared. Seize my property, shoot me, or send me to jail, Sanjay Raut is Balasaheb Thackeray’s follower and a Shiv Sainik, he’ll fight and expose everyone. I’m not one to stay quiet, let them dance. The truth will prevail.”

In February, Pravin Raut was arrested by the ED in connection with the case. He is currently in judicial custody.

The Bharatiya Janata Party (BJP) criticised Sanjay Raut for skipping the summons. “Why is he scared of Enforcement Directorate if he is innocent? He has all the time to give a press conference but no time to visit the probe agency office for questioning,” said BJP MLA Ram Kadam, according to NDTV.

Denying Sena MP’s allegations of a political vendetta, Union minister and BJP leader Raosaheb Danve told ANI, “CBI and ED work independently. It has nothing to do with politics.”