The flyer, carrying two undeclared egg and beef sausage McMuffins and a ham croissant in his luggage, was fined for flouting Australia’s new strict biosecurity rules that were brought in as a precaution against a Foot and Mouth disease (FMD) outbreak in Indonesia 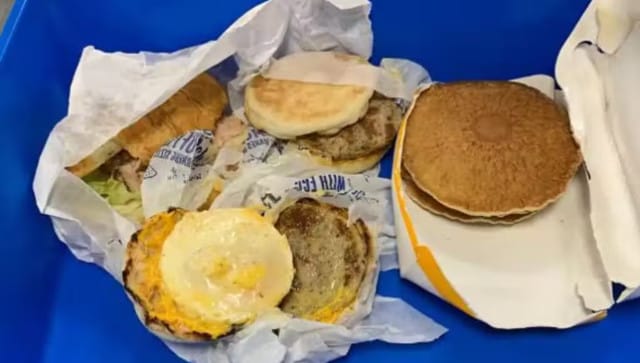 A traveller had to pay more than double the airfare to Bali for sneaking in McMuffins into Australia. Australian Ministry of Agriculture

Recently, a traveller arriving in Australia from Indonesia had to pay AUD 2,664 ($1,874) in fine for carrying a McDonald’s meal in his backpack, which is more than double the airfare to Bali.

The unidentified traveller was sniffed out of the queue by a black Labrador called Zinta at Darwin airport after touching down in Australia on a flight from Bali.

According to a report by CNN, the flyer was carrying two undeclared egg and beef sausage McMuffins and a ham croissant in his luggage.

Why was he fined?

Australia has been on high alert for the past some days now and the authorities brought in new biosecurity rules after a Foot and Mouth disease (FMD) outbreak in Indonesia spread to Bali, which is a popular destination for Australian tourists.

According to the Metro, the traveller was fined for failing to declare potential high biosecurity risk items and providing a false and misleading document.

The report said that if the highly contagious disease arrived in Australia, it could cost the country AU$80 billion over the next decade.

Responding to the incident, agriculture minister Murray Watt said, “This will be the most expensive Macca’s meal this passenger ever has.”

“This fine is twice the cost of an airfare to Bali, but I have no sympathy for people who choose to disobey Australia’s strict biosecurity measures, and recent detections show you will be caught.”

He added in a statement that passengers need to make sure they are fulfilling the conditions to enter Australia, by following all biosecurity measures.

The statement went on to confirm that the passenger had been issued with “a 12-unit infringement notice for failing to declare potential high biosecurity risk items and providing a false and misleading document.”

The seized products are to be tested for foot and mouth disease before being destroyed.
In a similar case, a woman was fined the same amount for bringing a Subway into the country from Singapore.

What is Foot and Mouth disease?

According to The Guardian, Indonesia has till 27 July reported 429,000 cases of foot and mouth disease since it was first detected in May this year.

Indonesia is struggling to control the disease, which is estimated to cause an annual loss of US$1.37bn to Indonesia’s economy, according to analysis by the Indonesian Cattle and Buffalo Breeders Association.

FMD affects cloven-hoofed animals including cattle, buffalo, camels, sheep, goats, deer and pigs. It causes blisters in and around the mouth area and infected animals may drool or limp.

Even though animals may recover, there is no treatment or cure for the disease. While its cases are rare in humans, we can carry the virus in the nose for up to 24 hours and act as a carrier.

FMD should not be confused with hand, foot-and-mouth disease commonly seen in children. The two diseases are different and are caused by different organisms.

How is Australia preparing to tackle Foot and Mouth?

Last month, the Australian government announced a $9.8 million biosecurity package, with new measures introduced across the country’s borders, including sanitation foot mats at all international airports and biosecurity dogs stationed at both Darwin and Cairns Airport, after the highly contagious disease began spreading through cattle in Indonesia, CNN reported.

“Travellers arriving from Indonesia will be under much stricter biosecurity scrutiny due to the presence of Foot and Mouth disease (FMD) in Indonesia,” read a statement released by the Department of Agriculture, Fisheries and Forestry on 19 July.

As per the new rules, anyone entering Australia without declaring biosecurity risks could be issued with an infringement notice of up to $2,664.

“Travellers entering Australia on temporary visas may have their visas cancelled and, if so, will be refused entry into Australia.”