Geologists say that sinkholes are more likely to appear in areas that have soluble rocks – like salt beds and domes, gypsum, limestone – below the land’s surface. These rocks can naturally dissolve into the groundwater that circulates through these holes 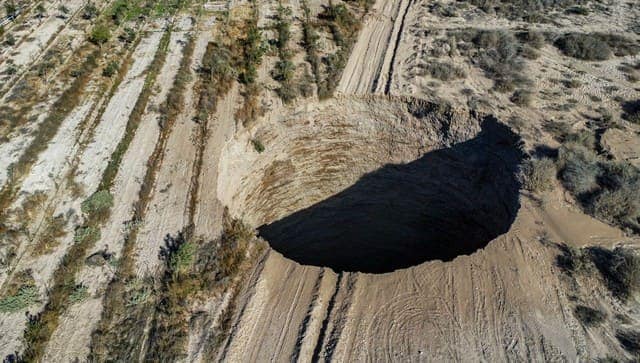 On 30 July, the hole appeared on a land where Canada based company Lundin Mining was running a copper mining operation. AFP

A giant sinkhole in Chile which first appeared on 30 July has now grown large enough to swallow India Gate.

At the time of its discovery, the sinkhole covered a diameter of 105 feet. That number has now increased to 160 feet.

The National Geology and Mining Service, also called Sernageomin, has sent experts to examine the hole which appeared in an area located 800 kilometres north of Chile’s capital city of Santiago.

Owing to the size of the sinkhole, officials around have ordered to stop work at a nearby copper mine.

Let’s take a look at what the phenomenon and other such incidents around the world.

Why do sinkholes appear?

As per the United States Geological Survey (USGS), a sinkhole is a depression in the ground that has no external surface drainage. Basically, when it rains, all of the water gets collected in the sinkhole which typically drains into the subsurface layer of the Earth.

Geologists say that sinkholes are more likely to appear in areas that have soluble rocks – like salt beds and domes, gypsum, limestone – below the land’s surface. These rocks can naturally dissolve into the groundwater that circulates through these holes.

So, landscapes that have more soluble rocks underneath their soil are highly susceptible to huge underground spaces and caverns. As these rocks dissolve more into the water and are carried away, the cracks widen up until the ground above them collapses.

Sinkholes can also be caused by man-made conditions like blasting dynamite for mining.

Similarly, developmental projects and other infrastructural activities can cause water to collect in certain areas and was away any supporting layer of rocks which can result in sinkholes.

How was the sinkhole in Chile discovered?

On 30 July, the hole appeared on land where Canada-based company Lundin Mining was running a copper mining operation.

The company said in a statement, “Upon detection, the area was immediately isolated and the relevant regulatory authorities notified. There has been no impact to personnel, equipment or infrastructure.”

Lundin further said that the sinkhole has remained stable since it was detected and the company is closely monitoring the nearby Alcaparrosa mine. Work has been suspended in the mine.

The mayor of Tierra Amarilla, Cristóbal Zúñiga, has asked for clarification on the cause of the collapse. According to LiveScience, Cristóbal said that the mining operations at Alcaparrosa have already destroyed houses and streets in the area.

“Today it happened in a space that’s an agricultural property, but our greatest fear now is that this could happen in a populated place, on a street, in a school,” he added.

How have officials reacted?

The National Service of Geology and Mining or Sernageomin said that it is still carrying out an investigation to determine the cause of the sinkhole.

According to NBC News, the geology and mining service has ordered all work to stop in and around the area. In addition to this, it said that it was starting a “sanctioning process”. However, the agency refused to provide details on the action.

Sernageomin has installed water extraction pumps at the mine and will soon investigate the mine’s underground chambers for potential over-extraction.

In February 2022, a huge sinkhole developed in a stream located in south Kashmir. According to media reports, the hole disrupted the entire flow of the stream as water from it was draining into the sinkhole.

Last year, a sinkhole appeared in Mexico’s Santa Maria Zacatepec. The pit was about 400 feet wide and 150 feet deep. The Mexican government sent soldiers to prevent people from going near the hole.

In 2020, a sinkhole appearing in China’s Xining swallowed a bus and many pedestrians, leaving six dead and another 16  injured.

In 2016, a sinkhole that appeared in the Japanese city of Fukoaka engulfed part of a five-lane road.