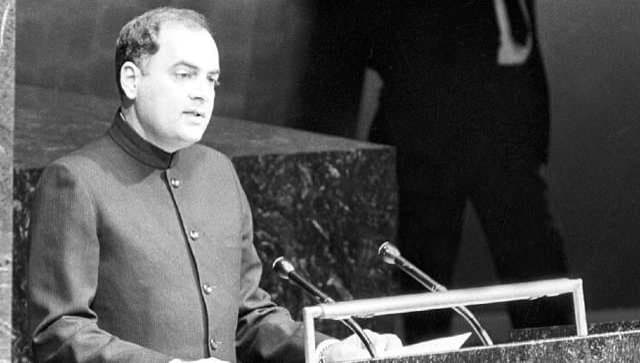 New Delhi: Supporters of Iran’s conservative government have praised the attack on British author Salman Rushdie in New York on Friday, saying that Ayatollah Ruhollah Khomeini’s fatwa, has finally materialised after 33 years. Some even said that they were hoping for the author to die following the brutal attack.

Meanwhile back in India, where the book was banned in 1988, K Natwar Singh, who was a Union Minister in the Rajiv Gandhi government, which banned “The Satanic Verses“, strongly defended the decision asserting it was taken “purely” for law and order reasons.

Here’s a look at the journey of Satanic Verses in India:

The Satanic Verses is Salman Rushdie’s fourth novel, which was published in September 1988. It was inspired by the life of Prophet Muhammad. When Rushdie wrote the novel, he thought its many references to Islam might cause some ripples, reports The Guardian. “I expected a few mullahs would be offended, call me names, and then I could defend myself in public,” Rushdie would tell an interviewer much later. 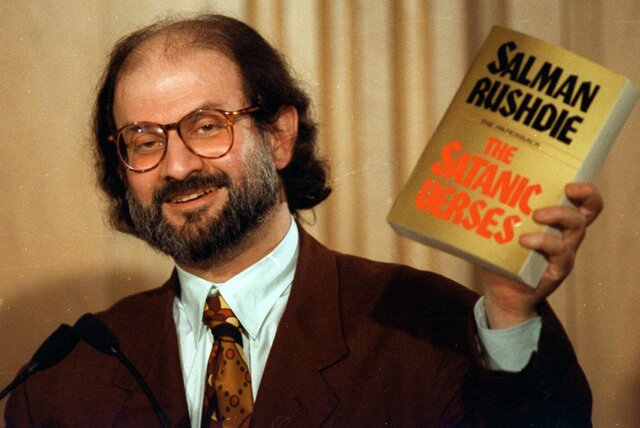 Author Salman Rushdie holds up a copy of his controversial book, “The Satanic Verses” during a 1992 news conference in Arlington. AP

According to the report by The Guardian, by October 1988, he already needed a bodyguard in the face of a deluge of death threats, cancelling trips and hunkering down. One Muslim-majority country after another banned the book, and in December thousands of Muslims demonstrated in Bolton, Greater Manchester, and burned a pile of his books. In Islamabad, six people were killed in a mob attack on the US cultural centre in the Pakistani capital to protest against the book. There were riots in Srinagar and Kashmir. 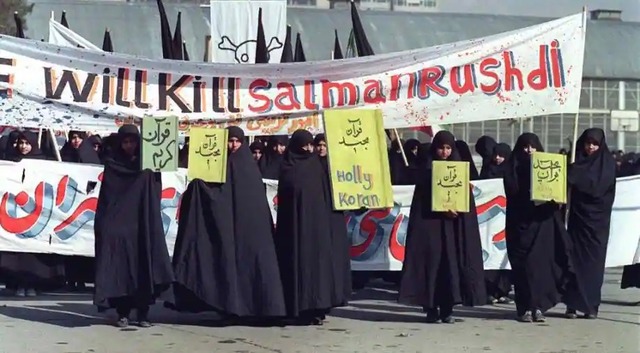 In this file photo taken on 17 February, 1989, Iranian women are seen holding banners which read “Holly Koran” and “Kill Salman Rushdie” during a demonstration against British writer Salman Rushdie in Tehran. AFP

The day after those riots, 14 February, 1989, the supreme leader of Iran, Ayatollah Ruhollah Khomeini, issued a religious decree, a fatwa, calling on all Muslims to execute not just Rushdie but everyone involved in the book’s publication. An Iranian religious foundation offered a $1 million bounty, $3m if an Iranian carried out the killing. Iran broke off relations with Britain over the issue.

What happened in India

Following the controversy and the fatwa issued in Iran, India, at that time under Congress rule with Rajiv Gandhi as the prime minister, banned the novel’s importation a month after it was published. Over two dozen other countries also banned the book, with some enforcing harsh punishment for possession of the novel.

When in 2015, senior Congress leader P Chidambaram called the decision wrong. Congress spokesman Randeep Surjewala questioned the very assertion that the book was ‘ever banned by the government’. Chidambaram was the Minister of State for Home Affairs in the Rajiv Gandhi government from 1986-89.

“Satanic Verses was never banned in India. The import of the book was banned. Considering the prevailing conditions and the societal atmosphere at that point of time, Penguin India, on the advice from its consulting editor Khushwant Singh, took a decision to neither print nor publish the book in India. That sort of summarises the 28-year-old history of the event. To say that the decision to impose the ban was right or wrong in hindsight would be inappropriate on the part of Congress,” he said according to an article by Times of India.

Following Friday’s attack, which came only two months after Nupur Sharma faced similar vilification because of her comments on Prophet Muhammad, K Natwar Singh, who was a Union Minister in the Rajiv Gandhi government defended the decision on Saturday asserting it was taken “purely” for law and order reasons.

Singh said he was part of the decision and had told the then prime minister the book could cause serious law and order problems as feelings were running very high. Singh (91) rejected as “rubbish” the charge by critics the Rajiv Gandhi government’s decision to ban the book was driven by appeasement towards Muslims.

“I don’t think it (the decision to ban the book) was wrong because you see it had led to law and order problems, particularly in Kashmir. In other parts of India also there was disquiet,” Singh told PTI.

“Rajiv Gandhi asked me what should be done. I said, ‘all my life I have been totally opposed to banning books but when it comes to law and order even a book of a great writer like Rushdie should be banned’,” the diplomat-turned-politician said.

Muslims burn an effigy of Salman Rushdie as they shout anti-government slogans during a demonstration near India’s largest mosque in New Delhi in February 1999. AFP File

“I said, ‘the entire Muslim world is going to flare up, we have a large number of Muslims and apart from that, what the book contains at this time, is not acceptable’,” he recounted.

The Congress government even imposed a travel ban on Salman Rushdie, barring him from coming to India. The ban was eventually lifted by the Vajpayee government in 1999.

But what followed was that Rushdie went into hiding and lived for several years, much of the time in a remote farmhouse in Wales, under the alias Joseph Anton, celebrating his literary heroes Joseph Conrad and Anton Chekhov.

With input from agencies