The video shows the beautiful moment of a Ukrainian soldier meeting his mother after the “liberation of Kozacha Lopan.” 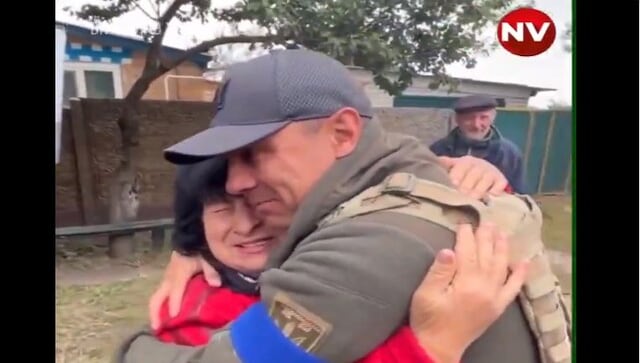 Screengrab from the video posted on Twitter by @Mariana_Betsa.

The guns had gone quiet, and the country’s blue and yellow flag was raised again in the Kozacha Lopan settlement of Ukraine’s Kharkiv region after the nation consolidated its control over it. Regaining its control over the urban type settlement in the Kharkiv region must surely have gladdened the Ukrainian side, as it is only five kilometers away from the Russian border and has been extensively damaged during the conflict. Locals and officials have expressed their emotions by raising their national flag high. Now, a video that is making the rounds on the internet might leave you teary-eyed. The video shows the beautiful moment of a Ukrainian soldier meeting his mother after the “liberation of Kozacha Lopan.”

The region was among the first to fall to Moscow after Russian forces launched the so-called ‘special military operation’ in Ukraine. Occupied since March by the Russian forces, Kozacha Lopan was an administrative centre for the occupational authorities. Exhibiting the happiness of the locals, the video, which is making rounds on the internet, shows the emotional moment when the soldiers are meeting their family members. The video was shared by Ambassador of Ukraine to Estonia Mariana Betsa, who while posting the video wrote, “Tears of joy. Ukrainian defender meets his mother after the liberation of Kozacha Lopan in the Kharkiv region”. The video opens by showing the mother running towards a car happily. A soldier comes out of the car, and immediately hugs his mother, who started crying and kisses her son.

An old man, who seems like the father, comes from behind, shakes hands with other men, and then hugs the soldier and kisses him on his cheek. The video has left the internet teary-eyed, with many claiming that this is the best video that they have come across on the internet. Few even said that out of all the videos of the town being liberated from Russian authorities, this tops the list. One user commented, “Of all the footage from liberated towns we’ve seen in the past few days, this is the best one!”

Of all the footage from liberated towns we’ve seen in the past few days, this is the best one!

Some revealed that after watching the video they are also having “tears of joy.”

So far the video has been played more than 13,000 times and the numbers are increasing constantly.