The hilarious caption of the post suggests that Mitchell Johnson was not quite scared by meeting the unwanted guest. 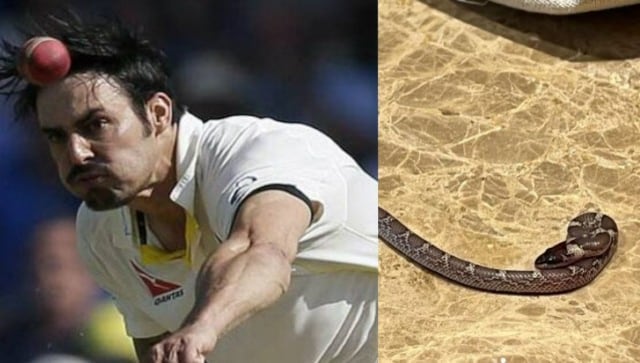 A number of cricketing legends around the globe have gathered under one banner again thanks to the Legends Cricket League. The exclusive tournament started with the match between India Capitals and Gujarat Giants on Saturday at the Eden Gardens in Kolkata and will continue till 8 October. In the opening game, the Gujarat side, under the captaincy of Virender Sehwag, beat Jaque Kallis-led Capitals by 3 wickets.

On Monday, former Aussie pacer Mitchell Johnson, who has been serving the Capitals in the competition, came up with a surprising occurrence through an Instagram post on his personal handle.

Johnson uploaded a photograph of a little snake that he encountered inside his hotel room in Lucknow. However, the hilarious caption of the post suggests that the Australian was not quite scared by meeting the unwanted guest. He successfully captured a snap of the creature and went on to ask, “Does anyone know what type of snake this is?” and then hilariously added, “(It was) just hanging out in my room door.”

The unexpected encounter unsurprisingly caught much attention from the users. Since being shared, the post has accumulated more than 9,000 likes so far on Instagram.

The comment section saw numerous bizarre reactions from the viewers. A person sarcastically asked the bowling maestro, “Looks like he’s head gets shamed, Did you bowl him a Bouncer?” Another user marked the meeting as an “average day in Australia” because of the country’s vast swathes of wildlife. An individual noted, “I googled that it is an oriental wolf snake.”

Talking about season 2 of the Legends League Cricket, in the first match of the tournament, India Capitals posted 179 runs on the board, powered by Ashley Nurse’s quickfire 43-ball 103. While defending the decent total, Johnson bowled three overs allowing just 22 runs and getting a wicket to his name. In the final delivery of his second over, the left-arm seamer sent off Sehwag for just 6 runs.

However, Kevin O’Brien played an explosive innings of 106 runs in 61 deliveries and helped his team to breach the 180-run target with 8 balls left to spare. Former India bowler Pravin Tambe from the Capitals bowled significantly well and got three wickets to his name.