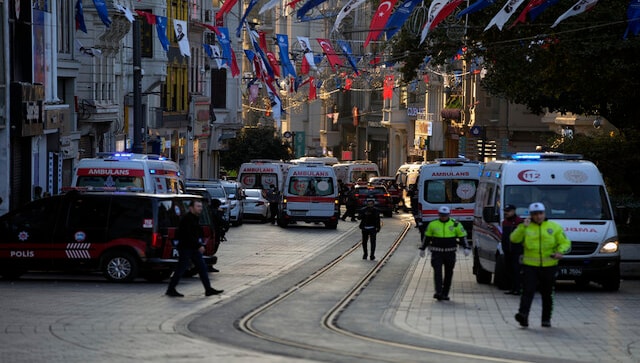 Police vehicles and ambulances are parked at the site of an explosion on Istanbul’s popular pedestrian Istiklal Avenue in Istanbul, Turkey, Nov. 13, 2022. AP

New Delhi: At least six people have been killed and several injured in a blast in Turkey’s largest city Istanbul on Sunday.

The explosion happened on the city’s popular pedestrian Istiklal Avenue. President Recep Tayyip Erdogan has said that the initial probe pointed to a ‘terror attack’.

WARNING: GRAPHIC CONTENT – At least six people were killed and 53 others wounded when an explosion rocked a busy pedestrian street in central Istanbul pic.twitter.com/WamF8xNzj8

Videos posted online showed flames erupting and a loud bang, as pedestrians turned and ran away.

Other footage showed ambulances, fire trucks, and police at the scene. The cause of the explosion is not clear yet. Social media users said shops were shuttered and the avenue closed down.

The avenue is a crowded thoroughfare popular with tourists and locals, lined by shops and restaurants. The explosion occurred at about 4:20 pm local time, AP reported.

The area has been evacuated, AFP reported.

Images shared on social media at the time of the explosion indicated it could be heard from far away and that there were also flames.

A wide black crater is also visible in the images as well as several bodies on the ground nearby.

Turkey was hit by a string of deadly bombings between 2015 and 2017 by the Islamic State and outlawed Kurdish groups.