After nearly a month of riveting cricketing action comprising 45 matches, the 2022 T20 World Cup reached its conclusion on Sunday with England defeating Pakistan in a cracker of a final at the Melbourne Cricket Ground to win the showpiece event for a second time.

The tournament, which was originally supposed to take place in 2020 but was postponed by two years thanks to COVID, had it all — from outstanding individual performances both with ball and ball to sensational catches, from the Davids of cricket slaying the Goliaths to pre-tournament title favourites getting dismantled in knockout matches. Lest we forget, the tournament was also an important lesson for the ICC as far as organising tournaments in Australia during ideal weather conditions is concerned.

With the T20 World Cup now ‘coming home’, England have officially crowned themselves as the undisputed kings of white-ball cricket, having won the ODI world title in 2019 on home soil. And with the team also enjoying a stellar run in Tests earlier this summer at the start of the ‘Bazball’ era, there surely isn’t a better time to be a supporter of the England men’s cricket team.

With the eighth edition of the T20 World Cup coming to an end, we take a look at some of the lessons learnt from the event, starting with the victorious side:

England are the team to beat in limited-overs formats

England started off on a shaky note, registering a scratchy win against Afghanistan and losing against Ireland, before a washout against Australia left them staring at the prospect of an early trip back home.

The Jos Buttler-led side, however, have been phenomenal since then; they would avenge their 2021 semi-final loss against New Zealand with a one-sided win and qualify for the knockouts by beating Sri Lanka before thrashing India by 10 wickets in the semi-final. And it was ultimately their disciplined bowling unit along with yet another special knock from Ben Stokes that landed them a second world title in the format.

England completely revolutionised their approach towards limited-overs cricket in the aftermath of the first-round exit from the 2015 ODI World Cup, playing a fearless, attacking brand of cricket and having pretty much all the bases covered in both ODIs and T20Is.

Skipper Buttler has simply carried forward the approach that his predecessor Eoin Morgan introduced in the second half of the previous decade, as a result of which England are the only team in the history of the men’s game to hold both the ODI and the T20 World Cups at the same time.

No team can be taken for granted

Another major takeaway from the tournament has been the manner in which some of the lower-ranked sides, aka the ‘Minnows’, have expressed themselves and defeated some of the more fancied teams. Sri Lanka and West Indies were given jolts early on in the First Round, the latter failing to reach the Super 12s after losing against Scotland and Ireland.

Champions England lost to neighbours Ireland yet again while Zimbabwe won the ‘Bean Derby’ against Pakistan in style. 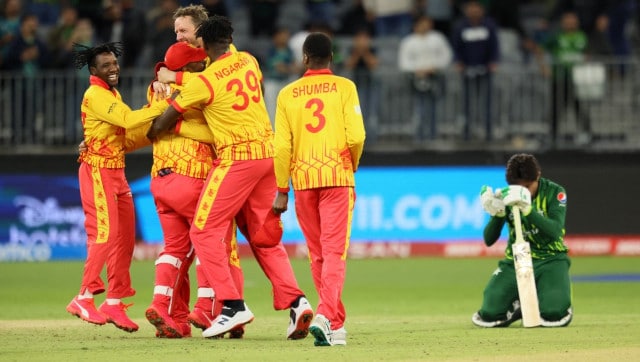 One defeat would then lead to another, and Pakistan were left staring at an early elimination after losing against Zimbabwe. AFP

And many a follower of the sport would’ve laughed at the thought of Netherlands inflicting the knockout punch on South Africa before the two sides collided in Adelaide on the final day of the Super 12 fixtures.

The fight displayed by the teams is sure to send a message to the ICC and some of the more established teams — that no side is to be taken lightly in a format as volatile as T20. And that these teams deserve game time with the higher-ranked sides beyond ICC events, which is the only way they can live up to their true potential.

I hope Pakistan is sending Mr Bean to Netherlands as goodwill gesture.

Much like the 2019 ODI World Cup in England, the 2022 T20 World Cup in Australia will go down as a tournament that was nearly spoilt by erratic weather. While rain doesn’t cause as much havoc in this part of the world as it does in the United Kingdom, where steely skies during peak summer aren’t an anomaly, the fact is that hosting a cricketing event in the months of October and November in Australia isn’t the best of options. 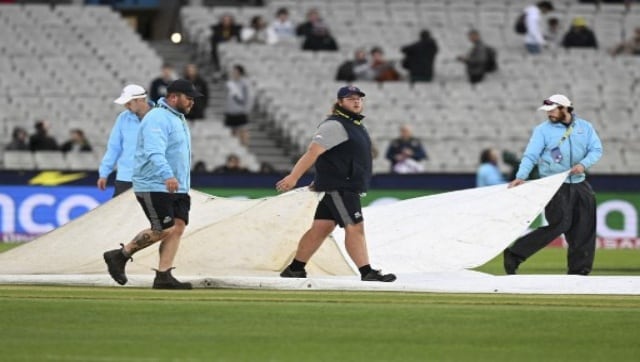 Several matches had to be called off due to rain in 2022 T20 World Cup. AFP

While hosting a multi-nation event in the peak summer months of December and January will be a difficult prospect for the ICC since Cricket Australia prefers hosting its marquee Test fixtures during this time, the February-March slot might just work better and witness fewer rain interruptions and make for a more conducive environment for a tournament as prestigious as the World Cup.

A lot of people tweeting that the ICC shouldn’t have held the #T20WorldCup in Australia at this time of year. But this La Niña weather event really isn’t normal. Melbourne’s average October rainfall is around 65mm. It’s had around 120mm *so far* this month.

Umpiring certainly could improve a notch

Another major letdown in what otherwise will be remembered as a successful tournament was the umpiring, the standards of which took a major beating with a number of contentious calls and howlers spoiling games that were otherwise high on quality and drama.

One such case was Shakib Al Hasan getting adjudged leg-before wicket during the Bangladesh-Pakistan encounter in Adelaide even though there was evidence of an inside edge. Shakib could have had a major impact on the outcome of the match, but was instead out for a duck.

Similarly, a five-ball over during Australia’s innings in their final Super 12 game against Afghanistan went unnoticed by the match officials.

All the negatives aside, one of the biggest positives from the tournament was perhaps the work that the curators put into preparing sporting pitches during the tournament.

Australian wickets generally are hard and offer extra bounce and the ball really does zip off at times, but can also be supportive towards batters once they set themselves in, leading to some interesting contests between bat and ball. And the kind of surfaces prepared for this year’s T20 World Cup certainly was a welcome change from the slower and lower tracks that were on offer in the UAE in the previous edition last year.

Perth was the liveliest of the surfaces, where the South African attack thrived against the Indians and decimated their top order with short stuff. Sydney, meanwhile, was extra supportive towards the batters and witnessed some of the higher scores in the tournament as a result, including two 200-plus scores. And Melbourne had a mix of both along with some support for swing bowling.