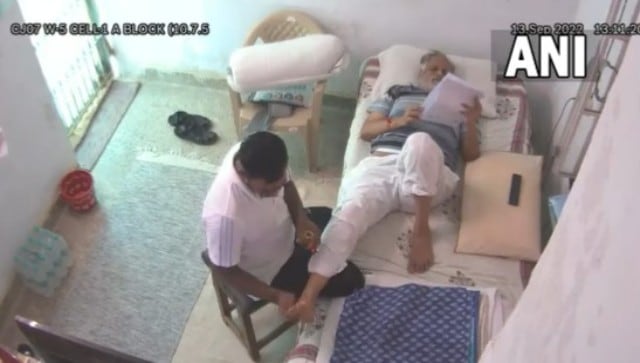 BJP IT cell head Amit Malviya tweeted the video and said, “Arvind Kejriwal has reduced Tihar to a massage parlour. His jailed minister Satyendra Jain would get a masseur, who would, in violation of all jail rules, indulge the inmate, because of his proximity to the Delhi CM. Delhi Govt manages Tihar. ये भ्रष्टाचारी राजनीति बदलने आए थे। (These corrupt people had come to change politics).”

Arvind Kejriwal has reduced Tihar to a massage parlour. His jailed minister Satyendra Jain would get a masseur, who would, in violation of all jail rules, indulge the inmate, because of his proximity to the Delhi CM. Delhi Govt manages Tihar.

Reportedly, it is an old video and the jail authorities have already taken action against concerned officers and jail staff members.

The Enforcement Directorate (ED), earlier alleged that Jain, who is arrested in connection with an alleged money laundering case, was being given VIP treatment inside the Tihar jail, including facilities such as head, back, and foot massages. The Delhi minister was arrested on May 30.

The probing agency also submitted evidence related to his ‘luxurious life’ in the prison to a court.

Additional Solicitor General (ASG) SV Raju, who was appearing for the ED, had said, “Unknown persons were giving massages and foot massages to Jain, even beyond curfew hours. He was given special food.”

The ASG further shared CCTV images with the court and further alleged that most of the time, Satyendar Jain was either in a hospital or in prison enjoying various facilities.

Slamming AAP by sharing another CCTV footage of Jain getting a foot massage, BJP’s Shehzad Poonawalla said, “VVIP treatment in jail! Can Kejriwal defend such a mantri? Should he not be sacked ? This shows true face of AAP!”

So instead of Sazaa – Satyendra Jain was getting full VVIP Mazaa ? Massage inside Tihar Jail? Hawalabaaz who hasn’t got bail for 5 months get head massage !Violation of rules in a jail run by AAP Govt

This is how official position abused for Vasooli & massage thanks to Kejriwal pic.twitter.com/4jEuZbxIZZ

Responding to the allegations, Delhi Minister Manish and party leader Manish Sisodia said, “Satyendra Jain has had two operations for spine injury. The doctor has prescribed him regular physiotherapy. After Covid-19, there is a patch in his lungs which is not been cured yet. The very idea of making fun of a person’s illness and the treatment being given to him is disgusting.”