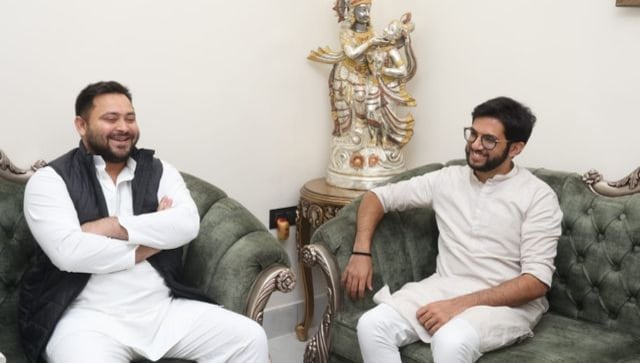 “We have been in touch with each other but could not meet due to Covid. We discussed various topics but did not discuss politics. Sure this friendship will continue,” Aaditya Thackeray said after meeting Tejashwi Yadav.

The Aaditya Thackeray-Tejashwi Yadav meeting comes amid the buzz around “opposition unity” against the BJP ahead of the next Lok Sabha polls.

Talking to media after the meeting, Yadav said, “The current challenge is to save the law and the democracy and we will do anything to save it.”

Aaditya, whose father Uddhav Thackeray had snapped ties with the BJP a few years ago, was accompanied by party colleagues Priyanka Chaturvedi and Anil Desai.

Yadav presented the former Maharashtra minister with books based on the life of his father and RJD president Lalu Prasad.

The chemistry between the two young leaders, both in their early 30s, was in marked contrast with the acrimony that charactertised relations between Shiv Sena founder Bal Thackeray, who wore his Maratha pride and Hindutva on his sleeves, and Prasad, an earthy Bihari who has always sworn by secularism.

Tejashwi and Aaditya met Bihar Chief Minister Nitish Kumar, who lives right across the street. Kumar, whose JD(U) had risked a split, allegedly engineered by the BJP, like the one suffered by the Sena in Maharashtra, has become a vocal proponent of “opposition unity” since he joined the “Mahagathbandhan”, stripping the saffron party of power in the state.

The BJP criticised the meeting between Tejashwi and Aaditya on planks as varied as insult to the “greatness” of Bal Thackeray and insensitivity to Bihari sentiments.

RJD hit back, claiming that the BJP was rattled by “opposition unity”, which has been achieved in Bihar and was taking shape in other states.

“Late Bala Saheb Thackeray was a pious soul. He must be turning in his grave to learn what Aaditya, his grandson, is doing. What does the young leader expect to learn from Tejashwi who has accomplished little except amassing huge wealth in a short period of time?” said Jivesh Kumar, a former Bihar minister and BJP leader.

“The people of Bihar are eager to see how much Aaditya Thackeray’s Hindutva rubs on Tejashwi Yadav,” he said in a tongue-in-cheek, but oblique reference to RJD’s plank of secularism.

Another BJP spokesman Nikhil Anand raked up the Sushant Singh Rajput suicide case to allege that the Uddhav Thackeray government had displayed an “anti-Bihari” mindset while getting the matter probed.

In a statement, Anand insisted that the conduct of the then ruling Maha Vikas Aghadi and its opposition to a CBI investigation “raises many doubts” and asked Tejashwi to “boycott” leaders like Aaditya. However, RJD spokesman Mrityunjay Tiwari responded to the BJP’s tirade saying “it is Aaditya Thackeray who is coming all the way to meet Tejashwi Yadav, and not the other way round. It shows the stature of our young leader and, indeed, is a matter of pride for Bihar, which has shown the way to all anti-BJP forces”.

“The BJP should remember the abominable attitude of its leaders in states like Gujarat from where migrant workers were compelled to flee during the COVID lockdown. The aggrieved Biharis are going to punish the BJP, which also rules the Centre, in the next Lok Sabha polls,” Tiwari added.

With inputs from PTI