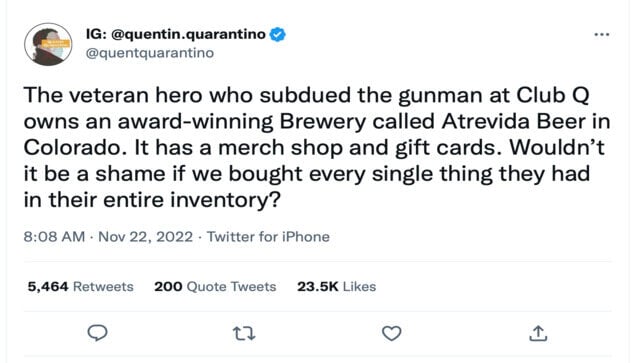 The shocking memories of the deadly Colorado Springs shooting are still fresh in people’s minds where a single person opened a mass firing at an LGBTQ nightclub and further killed five people on the spot. Also, how can one forget the brave efforts of a military veteran who was present at the club during the assault and with the help of one more person took down the shooter last Saturday?

We are talking about Richard Fierro who along with his family was celebrating a birthday at Club Q in Colorado Springs when the shooter attacked the people. While the man in a display of courage and patriotism decided to stop the attacker single-handedly, he has now become a hero for the people across North America who are now celebrating his service.

As a part of this, people are indulging in buying more and more merchandise and beers from the Fierros owned-Atrevida Beer Co. The brewery which is famous for its beer and is also Colorado’s first Latin-owned brewery, with a female head brewer is trending all over the internet and people can be seen lining outside the door of the business to show their love and support for the army veteran.

A person also took to Twitter and urged others to join in and further the family’s beer business. While sharing the business website of the brewery, the user wrote, “Mr Fierro is a hero. Risk his life to save the lives of others. With his bare hands! His daughter’s boyfriend died in the shooting……He and his wife own a brewery. Let’s show the respect he deserves…let’s support their beer…”

Mr. Fierro is a hero. Risk his life to safe the lives of others. With his bare hands! His daughters boyfriend died in the shooting……😔He and his wife own a brewery…https://t.co/8O6eOz4bzL Let’s show the respect he deserves…let’s support their beer… https://t.co/MXUEoWcC1G

People in the comment section appreciated the man’s initiative and further also vowed to make purchases for the family.

Similarly, many others also shared similar posts in a bid to call upon more people for their contribution.

The veteran hero who subdued the gunman at Club Q owns an award-winning Brewery called Atrevida Beer in Colorado. It has a merch shop and gift cards. Wouldn’t it be a shame if we bought every single thing they had in their entire inventory?

It is pertinent to note that despite the 15-year army veteran’s selfless efforts to save the people, the shooter had taken down the lives of five people including Richard Fierro’s daughter’s boyfriend Raymond Green Vance. Among others included two women and two men from the club’s staff.