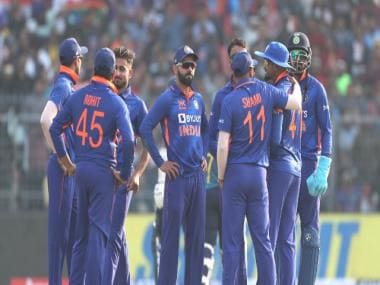 After thrashing Sri Lanka in the recently concluded three-match ODI series, India gear up for the stern test as they host the number 1 ODI team in the world, New Zealand, in three ODIs starting from Wednesday, 18 January.

India will be riding high on confidence after a 3-0 ODI series whitewash over Sri Lanka, however, they will be wary of the threat that New Zealand possess especially in the 50-over format. Moreover, the Black Caps are coming off a grand 2-1 ODI series win over Pakistan which means that they won’t be short of confidence either even when they will be without the services of star players Kane Williamson and Tim Southee for the series.

Hence, fans can anticipate a tough, nail-biting contest between the two teams.

Also, the three-match series will serve as a litmus test for both teams ahead of the 2023 ODI World Cup, which is set to take place in India later this year.

The Men in Blue have a chance to become the number one ODI team in the world and for that, they will have to win all three ODIs against New Zealand.

Notably, Rohit Sharma-led India are currently fourth in the ODI rankings with 110 ranking points. They are behind top-placed New Zealand, second-placed England and third-placed Australia in the rankings. However, if India manage to clean-sweep the series against the Kiwis then they will surpass New Zealand with 114 points, while the Black Caps, who currently have 117 points, will drop down to fourth place due to the deduction of points for losing games.

Meanwhile, England and Australia will remain second and third respectively.

Star India batter Virat Kohli looks in red-hot form as he smashed two centuries in the recently concluded ODI series against Sri Lanka and was adjudged the ‘Player of the Series’. The 34-year-old will be eager to continue his rich vein of form when he takes on New Zealand’s attack as that will multiply his morale and boosts his confidence in the build-up to the ODI World Cup.

Meanwhile, India captain Rohit Sharma found his touch in the first ODI against Sri Lanka but wasn’t much effective in the remaining two games. He got off to starts but failed to convert it into a big score, which he would like to change in the upcoming ODI series.

Chance for Ishan Kishan and Suryakumar to prove their worth

Questions were raised when Team India management and skipper Rohit decided to bench Ishan Kishan for the ODI series against Sri Lanka despite the fact that the young opener had smashed the fastest double hundred in the history of ODIs, against Bangladesh in the preceding series.

Shubman Gill was picked over Kishan to open with Rohit and the 23-year-old Punjab batter didn’t disappoint as he registered scores of 70, 21, and 116 in the Sri Lanka series, thus giving enough reasons to the team management not to tinker with the opening order.

However, Ishan Kishan is still likely to make it to the playing XI for the ODI series against New Zealand due to the unavailability of KL Rahul, who had asked for some time off due to personal reasons.

Hence, Kishan is expected to keep wickets in Rahul’s absence, but he will have to bat at number four, where Rahul bats. The adjustment should not be much of an issue for Kishan as he has batted in the middle order thrice in the 10 ODIs he has played so far.

So, if Kishan gets the playing time then he will have to make sure that he gives enough reasons to selectors and Rohit to consider him in their ODI plans rather than making him warm the bench especially when it’s a World Cup year.

Suryakumar Yadav, on the other hand, has already shown the world how lethal he can be when it comes to the T20 format, but now he will have to make name for himself in the 50-over format.

Yadav is likely to be included in the playing XI in the ODIs against New Zealand as middle-order batter Shreyas Iyer has been ruled out of the series due to a back problem.

Iyer, who was one of India’s steady ODI batters in 2022, failed to convert his starts against Sri Lanka, managing only scores of 28, 28, and 38 in the three games. The below-par show has put Iyer’s place in the ODI setup in jeopardy while creating an opportunity for Suryakumar Yadav to cement his place in the side and assist another middle-order hard-hitter Hardik Pandya in adding the firepower at the back-end.

Kul-Cha to reunite or will Shahbaz play

Choosing between Yuzvendra Chahal and Kuldeep Yadav is going to be a conundrum for India as they have been going with only one wrist spinner in their playing 11 to maintain their team combination. To add to that, Shahbaz Ahmed has also been included in the team in place of Axar Patel, who has also been given break for the series due to personal reasons.

Kuldeep’s form and ability to pick wickets in powerplay overs are the biggest plus but he has often been benched by the management for no understandable reason. Chahal, on the other hand, was rested for the second and third ODI against Sri Lanka due to a sore shoulder, but he is expected to be available for the opening ODI against New Zealand.

It is yet to be seen if the management will pick both Kuldeep and Chahal in the playing XI or if will they place their bet on Shahbaz or Washington Sundar, who could be good options to tackle the left-handers in the New Zealand camp.

Wickets with new ball ✅
Successful run-out off his own bowling ✅@mdsirajofficial speaks about his 4️⃣-wicket haul, including the special wobble-seam delivery to dismiss Hasaranga and shares his excitement ahead of the #INDvNZ ODI series opener in Hyderabad 😃 pic.twitter.com/2O4oUquNLC

Meanwhile, in the pace department, Mohammed Siraj has been brilliant and consistently providing early wickets for his team, while veteran Mohammad Shami has been partnering well with Siraj and has the knack of providing crucial breakthroughs. Also, young speedster Umran Malik has been successful in picking up wickets in the middle overs. Hence, the three fast bowlers are likely to start against New Zealand, while all-rounder Hardik Pandya will be the fourth pacer in the team.