A Chinese billionaire has seen a dip in over 90 per cent of his fortune as the country’s once red-hot property market continues its slump.

The wealth of Hui Ka Yan, the chairman of real estate developer China Evergrande Group, has plunged to $3 billion from $42 billion in 2017, according to the Bloomberg Billionaires Index.

Hui, known as Xu Jiayin in Mandarin, was not just once among China’s richest and high-profile titans but also held the title of the second-richest person in Asia, noted Bloomberg.

How did the billionaire lose 93 per cent of his personal fortune? Let’s take a closer look.

The development comes as Hui’s China Evergrande Group landed in hot water in the past few years.

But things took a downturn after China’s president Xi Jinping launched his “common prosperity” policy to redistribute wealth, leading to a crackdown on many industries, as per reports.

In November 2021, CNN reported citing Chinese state media that Hui sold over 7 billion yuan ($1.1 billion) worth of personal assets to “prop up his embattled company”.

As per CNN report, Evergrande has become China’s “most indebted developer with $300 billion in liabilities”.

The woes of Evergrande and other industry peers can be attributed to the country’s “three red lines” policy launched in 2021 to keep a check on leverage in the real estate sector.

The real estate developer defaulted on US$22.7 billion of offshore debt, consisting of loans and private bonds, in December 2021.

The company also failed to deliver its preliminary debt restructuring plan last year, stoking questions about its future, as per CNN.

However, this week, the company finally proposed a restructuring blueprint with two options, Bloomberg reported citing people familiar with the matter.

Earlier this year, Hui had vowed to pay back the creditors and deliver projects.

“2023 is a crucial year for Evergrande Group to fulfil its duty as an enterprise and deliver projects in every possible way,” the property magnate had said in a new year message seen by Hong Kong-based newspaper South China Morning Post (SCMP).

“I believe we can complete our mission of delivery, repay various debts, eliminate the risks, and start a new chapter on survival, as long as all of us work together and never give up on resuming our construction, sales, as well as operations,” he had said. 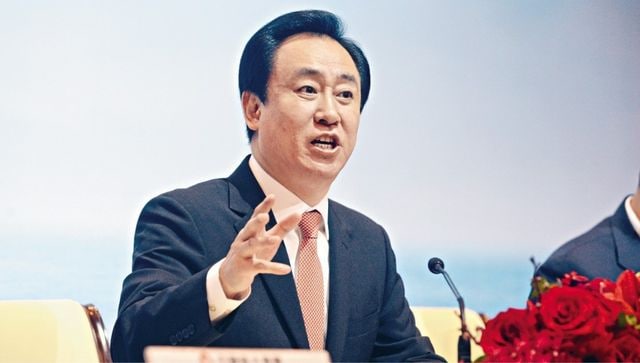 In January last year, Evergrande suspended trading of its shares on the Hong Kong stock exchange. The company’s stocks have lost 95 per cent of their value compared to their record high of HK$31.55 in October 2017, SCMP reported.

The real estate crisis in Beijing has hit others too. As per Bloomberg’s wealth index, China’s five richest property barons have lost around $65 billion combined in the last two years.

Analysts are concerned that the toppling of Evergrande could trigger “wider risks for China’s property market, hurting homeowners and the broader financial system”, as per CNN.

It’s not just his wealth that has diminished in the past few years.

The chairman of embattled developer Evergrande has also been shunned politically, as per reports.

Hui, who was a part of the Chinese People’s Political Consultative Conference (CPPCC), a group formed by government officials and the biggest business tycoons, was asked not to attend the yearly convention last year as his property empire’s fortunes sank, as per Bloomberg.

The property tycoon had been associated with the political advisory body since 2008 and was a part of the 300-member standing committee since 2013.

Hui, a Communist Party member for over three decades, has also been removed from the recent list of those who will comprise the CPPCC for the next five years, Bloomberg reported.

Willy Lam, an adjunct professor at the Chinese University of Hong Kong who has written several books on Chinese politics, told Bloomberg, “The CPPCC role is like an honorary reward that China gives to faithful business people to make contributions to the country”.

“It’s not surprising at all that property tycoons like Hui, who created trouble in the property sector with their over-leveraging, are out of the list.”