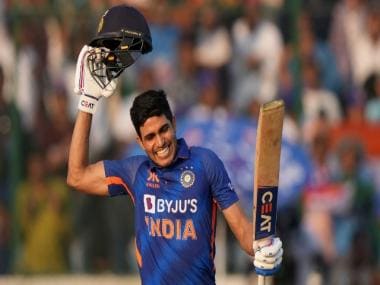 It’s just January of 2023, but young Shubman Gill seems to be already enjoying a consistent run in ODI cricket with the bat for India and looks to command the year.

Three centuries, including a highest score of 208 (against New Zealand) go on to show how Shubman Gill is making the most of his opportunities.

Statistically speaking, the 23-year-old is almost reaching his run tally of 2022, when he scored 638 runs from 12 ODIs at an average of 70.88. Last year, though, Shubman had registered just one ODI century, a knock of 130 against Zimbabwe in Harare.

This year alone, Shubman has registered scores of 21 and 116 (Against Sri Lanka); and 208, 40*, and 112 (Against New Zealand), which goes onto show he is not only peaking at the right time but also seems to have sealed one of the opening slots ahead of the ODI World Cup on home soil, later this year.

Gill, who made his ODI debut against New Zealand in early 2019, enjoys success as an opener in ODIs, having amassed 1254 runs from 21 matches at an average of 73.76.

That is even greater when compared to KL Rahul, who has opened for India 23 times in ODIs and scored 915 runs at an average of 43.57. Notably, Rahul was absent from the recently-concluded ODI series against the Black Caps as he tied the knot with actress Athiya Shetty.

Shubman seems to be enjoying significant partnerships with his skipper Rohit Sharma at the top of the order. In the first ODI against the Kiwis, Shubman forged a 60-run stand with Rohit, and that was followed by a 72-run stand in the second. The biggest stand between the two came in the third ODI, where the two forged a mammoth 212-run stand to decimate the opposition.

Moreover, India have been searching for that aggressive approach to batting, and maybe Shubman Gill will have a big role to play in it, as he looks all set to cement the openers’ slot for the ODI World Cup in India.

India’s next ODI challenge isn’t till March, when they take on Australia at home in a three-match series, and the job is only going to get tougher for Shubman Gill.

But, if the first two ODI series of 2023 are to go by, the Punjab youngster seems ready for the challenge, and it’s only the beginning.